Stu is a retired firefighter with 31 years working for the Anne Arundel County (MD) Fire Department. Widowed when he met Donna, they married in April 2009 and currently live and travel in a 41' KZ Escalade toy hauler fifth wheel pulled by a medium duty Freightliner.

Stu rode motorcycles in his younger years but took a long hiatus until purchasing the initial Big Red, a 1998 Harley-Davidson Electra-Glide with a Champion Trike conversion. He rode Big Red for several years before moving up to the current Big Red, a 2009 Harley-Davidson Tri-Glide.

Donna is a retired IT worker with over 30 years in the industry, from programmer to management. She learned to ride at age 55 when her now late husband was diagnosed with cancer. Widowed in 2004, she traveled the country solo in 2005, riding 27k miles through 42 states on her 2005 Harley-Davidson Softail Deluxe.

In 2007 she sold her home in Sparta, TN, bought a used Fleetwood Tioga Class C motorhome and hit the road with her 2006 BMW F650GS. She had sold the BMW when she met Stu in July 2008 and has since moved back to a Harley-Davidson ride.

Donna's various bikes in order of purchase are:
Their other companion is our puppy, Sadie. At nine weeks old she took her first motorcycle trip on the back of Big Red. Eventually she will ride in the back seat of the trike. 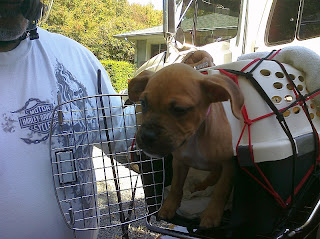 [This page will be updated as things change....]
Email ThisBlogThis!Share to TwitterShare to Facebook
Home
Subscribe to: Posts (Atom)