Walking is good for you?

Monday dawned, like it always does, and Stu wanted to go to the Webster Flea Market. The weather was perfect so we set Sadie up in the back of Stu's trike and headed out on the motorcycles.

It was a nice 45 mile ride with almost no traffic until we got close to the flea market. We found a good parking spot...made even better because Stu got us both in for $3 instead of $3 each. We were good 'do-bees' and parked in one spot.

Sadie was really anxious to go...not sure if she thought it was a visit to a dog park or was just loving the sights, smells and sounds. Stu took her over from me and we headed into the teeming mass of people.

As usual, there was too much too see, too little time to do it all. We usually prefer the outdoor vendors rather than the under cover ones who seem more prone to Dollar Store junk, clothing (that we don't need..although there was one shirt...) or useless inventions. The folks selling in the field have a wider variety of things we are interested in...old tools, fire department memorabilia, license plates, vintage cream pitchers and lots of junk.

We passed one table that was selling...well, I'll let the photo show you. I told Stu that we had enough of this already, I wasn't buying anymore, not even the plastic/rubbery kind! 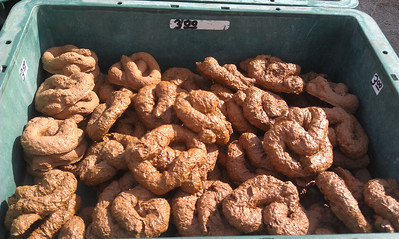 We walked till we couldn't walk anymore and finally sat down to eat. The hot dog was okay but the fries...oh my! They rivaled Five Guy fries...yummy and a large serving which we split. Sadie rested and people-pet watched after sharing a little of my hotdog. I checked my phone after we finished and found a missed call and voicemail from our good friends Nick and Terry Russell. They were still there so we told them where we were standing and they found us. I think we then stood for another hour and chatted both with them and friends of theirs that strolled up. Nick and I did the "our back hurts from standing and walking" waltz and we finally excused ourselves. I did snap a good photo of them just before we left.

Stu had brought along his Targus Monopod as a walking stick but his right knee was really hurting by the time we got back to the bikes. We went the opposite way of the bulk of the traffic, finding some nice back roads with few cars. After we got home, Stu decided that his knee wasn't going to take a lot more walking for a bit so we decided to pass on the Tampa RV Show. (I hope those that went today are having better weather than us...it's pouring here in Clermont.)

Sadie has been having fun with her new toy babies....I've been doing a little more writing....Stu took his scuba gear to get checked out. Other than household chores, that's about it.

Till next time - keep on rollin',
Donna and Stu
Posted by Donna aka Froggi at 11:14 AM
Labels: FL, friends, motorcycles, pets
Email ThisBlogThis!Share to TwitterShare to Facebook

I was a vendor at too many street art and craft fairs to really enjoy flea markets or other such events. Also, we want to get rid of things, not add more stuff.

Good idea NOT to aggravate the knee..I know exactly when to shorten our walks because of my feet..That really sucks, though...