Donna and I were riding in the Smokey Mountains and stopped by in of the new t-shirt shops the local Harley dealer has opened up on "the Dragon", US129. One of the employees said something to the effect that Harley was going water cooled next year. You hear this kind of thing every year or so. We kinda chuckled and went on our way.

Later over coffee, Donna and I asked each other if we would buy a water cooled Harley. Both said no. More discussion on new bikes and inevitably we came around to replacing Big Red ('09 Tri-Glide). It had 35,000 miles, was out of warranty, was going to need rear tires /brakes soon and already had gone through a drive belt and transmission rebuild. We bought these things to ride, not wait around in overpriced stores while they get fixed. I can fix just about anything on the bikes but not so easily without a garage. Our full-time lifestyle just doesn't lend itself to that. So we look for things with little maintenance required.

A phone call later we located a 2012 Tri-Glide at our favorite dealer in Cookeville, TN, Boswell's Harley-Davidson. A few weeks later the deal was done. New bike, new warranty, new payment (just a little bigger than before) and some fun making it mine.

Here's what I really like about the new bike:

All told, it's a better bike in that Harley improved on many of the mistakes they made in '09. Here's a photo we took when we picked up the bike...I've added a lot of bling but haven't taken time for a new pic. Soon... 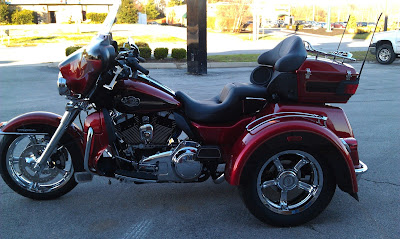 Still rolling,
Stu and Donna
Posted by Stu at 5:07 AM
Labels: motorcycles
Email ThisBlogThis!Share to TwitterShare to Facebook

Really nice bike. Can't wait to see it all dressed up. Enjoy the ride.

So do we know if Harley will water cool anything in the future, or is this just speculation? Love the two tone red, by the way....

Nice ride!!! Lovin' the color...That is the only way I will ever ride on a motorcycle again..a tri glide. No, I don't DRIVE them, just rode behind McGyver back in "the day" when we had a Suzuki 750..

Beautiful bike. Red is my favorite color, so it would have been my 1st choice, too. Enjoy!