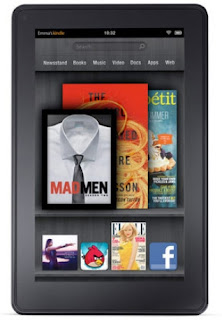 Oh, you wanted more? Okay, I like it a lot!
Really, it does what it's supposed to and a few things that it shouldn't.
Pros:
Cons:
That's it in a nutshell. If you want to know more of the technical stuff, Google for reviews. There's a bunch of them out there. Most of them are kinda like all those apps out there...useless. (for me anyway)
For $199 it's a good tablet. Just don't think it's iPad, you'll pay way more than that.
Still rolling,
Stu and Donna
Posted by Stu at 10:35 PM
Labels: Kindle
Email ThisBlogThis!Share to TwitterShare to Facebook

Thanks for the review of the Kindle Fire. It's always better to have a hands on review from an actual user.

Rick got one for Christmas-6 weeks early :) and he loves it. It does everything he needs it to. He still prefers to read on his old Kindle as it's lighter, but the Fire is fun and it was inexpensive. What more could you ask for?

Been thinking of buying one, thanks for the pros and cons.

We just got one for my husband and I am trying very hard not to latch on to it. I have downloaded free books from Pixels of Ink (thanks Donna) and a few useful apps. One con today while transferring DOCS from my laptop... While it looks like FOLDERS are transferred to the Fire when viewing it as an external drive, the Fire docs index does not recognize folders. I can transfer specific doc extensions, but you cannot organize them once on the Fire.